The house of ROYAL INSIGNIA’s reputation began with its production of Orders, Decorations, and Medals for members of the world’s Royal families and international ministries. It was the exacting technical expertise gleaned from medal making that enabled the luxury house to apply its remarkable creativity to the world of hand-crafted fine gifts such as objets d’ar t gilded in gold and adorned with precious stones, and jewellery.

More than three decades later, ROYAL INSIGNIA continues to garner the patronage of Royal households and governments, along with connoisseurs and collectors, in over 25 countries.

Today, we continue to captivate our clients with the one thing we have always been doing – Our Creativity. We are dedicated to fine craftsmanship and quality – a total experiential journey for the devout. Step into a world of unsurpassed glamour and luxury with ROYAL INSIGNIA.

“Everything at ROYAL INSIGNIA begins with a story,” says Ivan Hoe.

“We believe it is an honour and duty to understand every requirement of our clients in order to help them realise the item they desire.  We are on call every hour of the day to offer the utmost personalised service and to help capture their story. Every masterpiece we work on has a rich history that is meaningful to the client – a story told through gifts, not words, to be enjoyed for a lifetime and passed down in generations to come.’’

Benefiting from this new wealth of knowledge, Ivan Hoe soon found customers in Asia, the African continents, and the Middle East regions.

I. ​​​​Orders and Decorations

Royal Order is an order that is subject to royal support and were founded to recognize the honor among individuals who have been of loyal service to the royal family. A royal order’s conferee has to be the fons honorum​ or fount of honor of the royal family of a sovereign state.

Royal Order of the Family of Brunei

This Order was instituted in 1982 as the premier Order of the State. It is normally awarded to members of the Royal Family and Royal Head of States.

All the metal work of the order is in 18 karat yellow gold while the breast star is studded with rubies, emeralds and diamonds of near colourless quality.

While honor is known to take form in orders and decorations, there are also what we call service and commemorative medals. Historic events involve the loyal and devoted service of individuals, and the state recognizes their efforts by issuing and awarding commemorative medals.

The medal was instituted in three classes to commemorate the 2017 Golden Jubilee of Sultan Hassanal Bolkiah. The three classes are identical except for the metal from which they are made– Gold, Silver and Bronze.

The flora motif decorating the circumference of the medal was adapted from similar motifs found on the royal crown. Each of the motif was designed with five petals to represent the coronation date (5th October, 1962) and His Majesty’s fifty years reign. 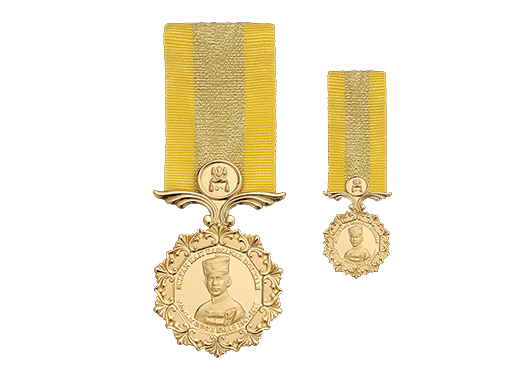 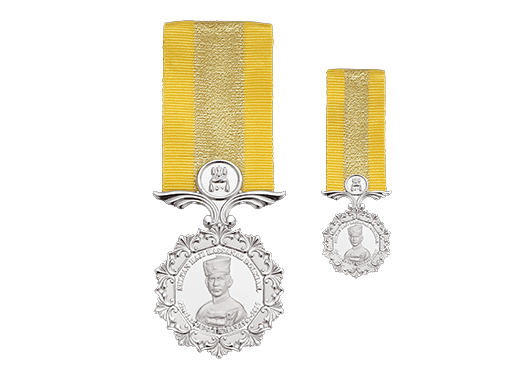 With His Majesty’s coronation date being October 5, 1962, and the celebration being about the Majesty’s 50 years of reign, the medal’s motif was designed with five petals. In addition to that, the floral motif of the medal’s circumference is adapted from the royal crown. Therefore, making each detail of the medal more meaningful than how it initially appears.

Diplomatic gifts are known for being the most challenging gifts to plan because, often, the recipients of these gifts are ambassadors, diplomats, dignitaries, and heads of state. And the goal behind every diplomatic gift is to build and strengthen peaceful and economic ties with other countries.

A great example of a protocol gift is this bespoke pistol and​ kris that ROYAL INSIGNIA created in partnership with famous Swiss company SIG Sauer upon the request of the organizing committ​ee of BRIDEX (Brunei Darussalam International Defence Exhibition and Conference).

These protocol gifts were presented to Sultan Hassanal Bolkiah of Brunei and King Abdullah II of Jordan. With these two rulers also being the supreme commanders of their country’s military forces, a bespoke pistol, and kris captures the appropriateness that a protocol gift fulfills.

Presidential gift with a gold coin on the center featuring a portrait of two heads of state in mid-hand-shake. The Gold Plateau is designed with a gold arch towering over the coin upholding the ornate enameled crown. With the further decoration of flowers on the base of the plateau, there is an abundance of symbols and meaningful details that play a crucial role in achieving good diplomatic relations.

In 2018, ROYAL INSIGNIA designed and crafted this bespoke trophy for the champions of the Arabian Gulf Super Cup.

Our designers drew from the UAE’s rich culture and heritage to create a trophy that was modern and uniquely Emirati. In the lattice structure extending from the base of the trophy, our designers have crafted a careful allusion to the palm tree, a symbolic and important plant integral to UAE’s historical identity.

Designed to replicate the extending branches on the palm tree’s leaves, the gold gilded palm lattice is a representation of the emirate’s civilization and resilience.Moving away from the traditional design of a trophy cup, our designers engineered a modern trophy with grooves along the crown of the trophy inspired by the Al-Jahili Fort in Al Ain.

A marvel of architectural prowess, the fort was constructed in 1891 around the Al-Jahili Oasis by Sheikh Zayed to protect palm farmers and residents.

A UNION OF CRAFTSMANSHIP & TECHNOLOGY

ROYAL INSIGNIA has capabilities to create three dimensional sketches, to be realized in wax or as metal tooling for stamping and followed by the final fabrication of the actual product. The complex process of manufacturing high quality product involve skills and accuracy – resulting in masterpieces poised to be marvelled upon. With the combination of age-old traditional techniques and marrying modern technology.

Our Mastery of Merits catalogue chronicles the process of designing and manufacturing a bespoke medal.  Thumb through the catalogue to fi nd out more about our various manufacturing capabilities.